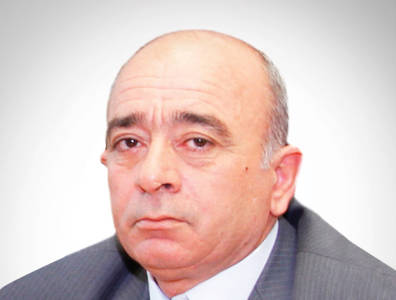 For complex, difficult-to-execute projects, we definitely have an edge.

Imanverdi Hasanov, general manager of Baku Shipyard, talks to TOGY about the shipyard’s ongoing and targeted projects, its expansion strategy in the region and the ship building and repair capacity in the Caspian Sea. Baku Shipyard was established in partnership with SOCAR (65%), AIC (25%) and Keppel Offshore & Marine (10%) in 2011, and SOCAR took over operatorship of the facilities in July 2018.

On Garadagh: “The shipbuilding industry in Azerbaijan is young, and bringing a shipyard to a competitive level takes time. We have huge support from the government, and we are now resident of the Garadagh Industrial Park, which allows us to reduce operational and construction costs as we are exempted from several taxes, such as property tax, land tax, profit tax and Customs duties and import VAT for importation of manufacturing equipment.”

On building the Khankendi: “It needs to be noted that not many of these types of vessels exist in the world, with this being the latest one. Also, it is the first and only DP3 vessel in the Caspian Sea so far. Our team gained a lot of experience through the construction of this vessel. The construction project team deployed by the Shah Deniz consortium, our client, was extremely helpful and worked closely with us on getting the project done in a timely matter.”

Most TOGY interviews are published exclusively on our business intelligence platform, TOGYiN, but you can find the full interview with Imanverdi Hasanov below.

Which projects is Baku Shipyard working on?
Baku Shipyard’s (BSY) design capacity is 25,000 tonnes of steel construction per year, making it the largest shipyard facility in the Caspian region. Our major client is the Azerbaijan Shipping Company (ASCO), for which we are currently constructing four vessels. Of these, two are RST 12C type crude oil tankers, an improved design with two units and a deadweight capacity of about 8,000 net tonnes. Construction of the hull for the first tanker is almost 100% complete. We are preparing to launch and test the vessel before delivery as per the original schedule.
The other two vessels are CNF 18C type Ro-Pax ferries that are based on a new concept and design created by ASCO and the Marine Engineering Bureau. These vessels will be able to transport railway wagons (56) and trucks (44) and will be operating between Caspian Sea countries.
We are preparing to sign a new contract with ASCO for another set of crude oil tankers of the same design as the one we are constructing now. Also, the discussions are ongoing for the construction of various vessels such as a new 100-tonne lifting capacity DP2 crane vessel, a 50-tonne lifting capacity DP1 crane vessel, a 50-tonne bollard pull tug boat, and a 120-tonne bollard pull anchor-handling tug supply vessel. We hope to materialise these contracts in the near future.
BSY relies on ASCO’s demand for newbuilds and repair jobs since there is a comprehensive renovation and replacement programme for the fleet. We are keen and look forward to playing a major role in this regard.

How competitive are you in the Caspian and how do you plan to expand in the region?
BSY is a brand-new establishment that has been in operation for only five years. For the shipyard to become competitive takes quite some time and experience. We believe that by completing similar projects, whether it be a newbuild or repair, we will increase our productivity and efficiency, thus leading to a more competitive pricing strategy. So far, we have been executing and successfully delivering unique projects in our yard.
We are constantly exploring new opportunities for the expansion within the Caspian Sea region. In fact, several major repair and upgrade projects have been carried out for foreign clients within this region. Take, for example, the integration works of the newbuild vessels that have been cut into several blocks so that they can pass through the Volga-Don channel or major renovation works of the barges and vessels that have been operational for years.
Our sophisticated yard facilities allow us to carry out the abovementioned works safely on shore compared to the traditional afloat methods.

Are you facing significant competition from existing shipyards on the Caspian Sea?
There are some challenges when it comes to competing with other long-time established yards within the Caspian Basin. Most of them are located in Astrakhan, Russia, and Tuzla, Turkey. This is due to the fact that these yards have been in operation for years their reputation and pricing are very well established and long-time customers are well informed about them. But our strength is the technology and innovation that we bring to the industry. Most of these have been tested for the past five years and have proven to be successful.
When it comes to repeat projects, they possess a competitive advantage over BSY. But for complex, difficult-to-execute projects, we definitely have an edge.

How did the integration of the shipyard into the Garadagh Industrial Park in 2015 help strengthen your position?
The shipbuilding industry in Azerbaijan is young, and bringing a shipyard to a competitive level takes time. We have huge support from the government, and we are now resident of the Garadagh Industrial Park, which allows us to reduce operational and construction costs as we are exempted from several taxes, such as property tax, land tax, profit tax and Customs duties and import VAT for importation of manufacturing equipment.
Furthermore, the government extended these exemptions afterwards by granting additional privileges for shipbuilding within five years. These exempt us from social protection fund payment for foreign workers, work permits and resident permits, Customs duties and taxes on all material and equipment, and as well allows us to apply input VAT at 0%.
At the same time, we have been requesting that the relevant Azerbaijani authorities mitigate taxes for the vessels that are temporarily coming to Baku Shipyard for ship repair.
There are still some challenges for our clients, as ships that sail out from Turkmenistan and Kazakhstan to come here have to pay additional VAT charges on ship repairs, which are considered services. This tax is not applicable to newbuilds, but it is negatively impacting our competitiveness, because on top of the repair costs we have to charge the client an additional 18% VAT. We need to see how we can mitigate this.
There are other things that need to be done to improve cost reduction, attract more clients and to build a green corridor for vessels that are coming from outside of Azerbaijan, which would finally contribute to the economy.

What did the shipyard learn from the building of the Khankendi subsea construction vessel?
It needs to be noted that not many of these types of vessels exist in the world, with this being the latest one. Also, it is the first and only DP3 vessel in the Caspian Sea so far. Our team gained a lot of experience through the construction of this vessel. The construction project team deployed by the Shah Deniz consortium, our client, was extremely helpful and worked closely with us on getting the project done in a timely matter.
More than 2,000 people were deployed during the construction of this project. The vessel was designed by Keppel’s Marine Technology Development and was initially planned to be constructed in Singapore. This is due to the fact that during the contract signing in April 2014, BSY had just been inaugurated and thus most partners did not have the confidence that the vessel could be built from scratch to completion here. This was considered a major risk for the client and involved parties.
The decision was made to construct the hull of the vessel in Singapore and transport it to Azerbaijan in three mega-blocks (two hull strips and a bow block) due to Volga-Don Canal restrictions. However, after the construction started we realised that the bow block could not be transported from Singapore due to our stability calculations. As a result, some changes were made to the contractual execution plan.
Due to strict requirements from the involved parties, this had to undergo a comprehensive process called management of change. It took several months to get the approval of all the partners involved. Several third-party companies were engaged by the operator as well. After providing all the necessary documentation and calculations, the operator agreed that BSY could take on the construction of this mega-block.
This was BSY’s innovative method to execute all of the works onshore under the 300-tonne gantry crane. The erection of the two hull strips with the bow block and the erection of the superstructure were all done onshore using the TTS Ship Transfer System. This is an integrated part of our yard operations consisting of trolleys and trestles that allow the vessels to be launched and/or brought onshore and moved sideways.
There was a lot of resistance at the beginning since most of those involved were not familiar with our equipment and its capabilities and it was considered an unproven methodology. To be frank, no other yard in the world has carried out an integration on such a scale. It was implemented for the first time in Baku Shipyard, and the concept was developed by local engineers led by myself.
After the integration was complete, our proposed innovative methodology was proven to be the right option for the construction. At the launch of the vessel, its lightweight was about 15,000 tonnes.
After completion of the construction works, the sea trials took more than two months to finish. This vessel is very sophisticated: It has accommodation for 175 people, two ROVs and deepwater diving systems. I tell my engineers that they are lucky to have seen this process. They [gained] great experience and worked on a lot of high-technology equipment.

In June 2018, SOCAR replaced Keppel Offshore & Marine as yard manager. How did the shipyard benefit from this collaboration and what is SOCAR’s strategy going forward?
Keppel Offshore & Marine’s operations management contract was terminated on June 30. That decision was made by Keppel Offshore & Marine, as Baku Shipyard being a JV has a localisation plan to replace expat professionals eventually. This is a long-term plan, but the execution of the Khankendi project fast-tracked the processes, as it gave us a lot of experience. As per Keppel’s managing director’s proposal, it was the right time to localise the shipyard since it is fully operational now and all of the facilities, equipment and capabilities have been tested and proven already.
However, BSY still remains a JV, and in case of demand, Keppel is always ready to provide engineering and expert support on various projects. Our goal is to maximise the localisation of the shipyard’s workforce and reduce subcontracting in favour of carrying out the construction works ourselves. And in order to achieve that, we need continuous running projects.
Today we have 1,300 direct local employees and about 250 subcontractor personnel. Around 30 local employees and engineers have been deployed to Singapore for on-the-job training purposes since the opening of the shipyard. Most of these people currently hold different supervisory and managerial positions within our organisation.

For more information on Baku Shipyard, see our business intelligence platform, TOGYiN.
TOGYiN features profiles on companies and institutions active in Azerbaijan’s oil and gas industry, and provides access to all our coverage and content, including our interviews with key players and industry leaders.
TOGY’s teams enjoy unparalleled boardroom access in 35 markets worldwide. TOGYiN members benefit from full access to that network, where they can directly connect with thousands of their peers.