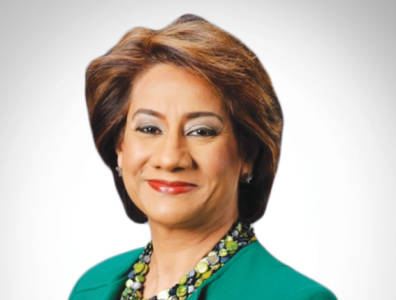 We have benefited from the fact that a lot of the multinational institutions are actually the major players in the sector.

Karen Darbasie, CEO of First Citizens Bank, talks to TOGY about financing for energy companies in Trinidad and Tobago, the areas the bank is concentrating on and how the domestic economy is progressing. First Citizens Bank is the highest-rated local financial institution in the Caribbean and the second-largest financial entity in Trinidad and Tobago.

• On capital for the industry: “A lot of the capital for the financing of the energy sector in Trinidad and Tobago has really come from offshore. Because of the structure of the sector in Trinidad and Tobago, we have benefited from the fact that a lot of the multinational institutions are actually the major players in the sector. They bring capital from their parent companies and/or home countries.”

• On the bank’s focus: “First Citizens has been focusing on the development of relationships in the SME part of the energy sector, which includes the services sector companies. We have decided that we are going to focus on that segment of the supply chain where we think the value proposition is there for us and for them, and educate them as to what is required to really start a proper banking relationship.”

• On energy risk: “The energy sector is a high-risk area. Essentially, the revenue stream is volatile, even more so than in manufacturing, because the value of the units of production is international price-driven, a factor over which the companies in the sector have no control.”

Most TOGY interviews are published exclusively on our business intelligence platform, TOGYiN, but you can find the full interview with Karen Darbasie below.

What is First Citizens’ approach to the industry?
First Citizens has been focusing on the development of relationships in the SME part of the energy sector, which includes the services sector companies. At an Energy Chamber event in late June 2018, we took the opportunity to engage and educate services sector companies about what banks look at when providing financing. We have decided that we are going to focus on that segment of the supply chain where we think the value proposition is there for us and for them, and educate them as to what is required to really start a proper banking relationship.
We need to understand the basis of their operations, look at their cashflows and sensitivity test them to ascertain their capacity for repayment. We also need to advise services companies that when they’re negotiating contracts, the longer the term of the contract they can get, the longer the term of financing we can provide. We can try to match the financing facilities with the terms of the contracts into which they enter.
The energy sector is a high-risk area. Essentially, the revenue stream is volatile, even more so than in manufacturing, because the value of the units of production is international price-driven, a factor over which the companies in the sector have no control.

How is the borrowing climate for energy companies in Trinidad and Tobago, from SMEs to large-scale companies?
Even the medium-sized players are still borrowing USD 400 million-500 million. The large players are borrowing more than USD 1 billion. That has always been the perspective.
First Citizens arranged financing for Phoenix Park Gas Processors in 2015. Prior to that, there have been very few transactions in the local market. Energy sector companies don’t really borrow in the local capital markets, which is why First Citizens’ focus is really on the services sector companies, which, while small compared to the upstream operators, are still sizeable in our market.
Even NGC [National gas Company] has not borrowed in the domestic market in any substantial amount. NGC, like Petrotrin, has raised its bonds and loans abroad on a syndicated basis. We know that Petrotrin has announced that it would be refinancing its bonds that are maturing in 2019, and that an RFP [request for proposal] would soon be issued. A transaction of the size of USD 850 million will be done in the international market. It’s not going to be done in the domestic market.

How is the domestic economy faring?
What was clear to us from the mid-year review is that the economy has stabilised. We are no longer in recession mode; we are looking at an economy that is growing in this financial year [October 1, 2017- September 30, 2018]. The projected growth rates vary at 0.5-2%, so the range is fairly wide, but it is clear that we have stabilised and that we are starting a growth mode.
I think it is also clear that Trinidad and Tobago has always been driven, from an economic perspective, by the energy sector. This year has been positive, not just from a production perspective – we are seeing gas production at higher levels than we’ve seen for quite a few years – but also, we are seeing prices at a reasonable level – reasonable in that we are seeing prices above budgeted prices for oil and gas. Prices are certainly not at the levels we saw five to seven years ago, but they are at levels where we are in line with the budget and we have a little bit of surplus over the budget.
I think it is clear that we are stabilised and we are about to start seeing the impact of growth in this economy.

How will this impact projects in Trinidad and Tobago?
We are expecting that some of the projects the government has been talking about – construction projects such as roads, hospitals and other infrastructure projects that have a broader impact on the wider economy – are going to start to come on stream now that the government has created some fiscal room to allow some spending. We are certainly seeing requests for financing coming for new government projects. Therefore, that filter-through impact is going to happen in the wider economy.
Certainly within the energy sector, I think that services companies are also going to see some of the added uptick from the new finds and from the production that is coming on stream. We see BP still talking about new projects and new investments. Other companies such as Shell and BHP are also announcing new producing fields.

How critical is the foreign exchange situation in the country, and is the government doing enough to help companies that need it most?
I don’t think the government’s role is to prioritise. The government’s role is to allow the market to determine the distribution of foreign exchange. Is it tight? Yes. Does it affect the energy companies? Not as much. Does it affect the wider manufacturing base in Trinidad and Tobago? Yes.
A lot of our raw materials are imported, so the ability to pay for raw materials has become difficult. The competitiveness of our export products is affected if the exchange rate is, in my view, overvalued. I think an increase in the foreign exchange rate will curb some demand and allow our exports to be more competitive on the international market, or even on the regional market.
I think we are near the point where we need to be very careful, from a country perspective, with regard to the cost of labour. I know that is one of the concerns with allowing the exchange rate to devalue. If the exchange rate does move to curb demand, the cost of living goes up and then you have the pressure of wage demand that fuels inflation, which then fuels increases in interest rates, and that makes the cost of capital more expensive. I understand the dynamic and I don’t think there is any one answer to the question.
From an economic perspective, allowing interest rates to increase marginally and the exchange rate to depreciate marginally is something that we should consciously look at as an economy. With the US clearly signalling an increase in interest rates, I’m not sure how much longer we are going to have a choice. If the interest rate differential becomes such that US interest rates are higher than TT dollar interest rates, it is going to force a decision on both interest rates and the exchange rate.

Is the Trinidadian banking sector investing in the digital financial system?
There is a lot of investment going on in digital platforms. Actually, that is one of the areas of focus for First Citizens.
We are investing in our digital access, whether it be cards or online banking. We are also investing in our physical infrastructure because we recognise that as a country, we are at an interesting crossroads, from a banking perspective. A portion of the client base still wants to deal with brick and mortar; the older generation wants to come into a banking hall. The younger generation wants to do everything digitally, whether online or on their mobile devices. It’s an interesting point in banking in this country, where you need to provide for both.
We clearly see that the transition is going to take us more into a digital space in the medium-to-long term. While we are in maintenance mode as far as our physical infrastructure is concerned, we are in growth mode with respect to our digital platforms.

For more information on Trinidad and Tobago’s energy industry, see our business intelligence platform, TOGYiN.
TOGYiN features profiles on companies and institutions active in Trinidad and Tobago’s oil and gas industry, and provides access to all our coverage and content, including our interviews with key players and industry leaders.
TOGY’s teams enjoy unparalleled boardroom access in 35 markets worldwide. TOGYiN members benefit from full access to that network, where they can directly connect with thousands of their peers.