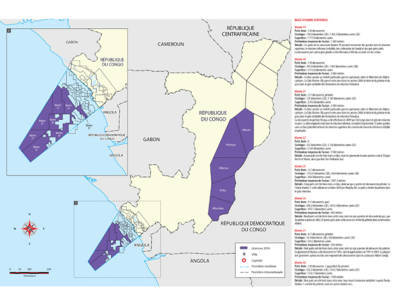 Announcement of results:End of March 2017

The official announcement of the beginning of Congo's 2016 Licence Round was made on October 28, 2015 at Africa Upstream Conference 2015 by the Ministry of Hydrocarbons. This initiative aims to stimulate investment in the country’s oil and gas industry. Interested companies are able to register for the round via congolr2016.com, and tender documents became available on October 15, 2016. The closing date for bids is March 29, 2017, and results will be announced at the end of May.

A total of 13 blocks are on offer in the Congo Licensing Round 2016, eight in the offshore Coastal Basin and five in the onshore Cuvette Basin. Data collected through geophysical surveys executed by PGS is available for potential investors.

COASTAL BASIN: The Coastal Basin’s eight blocks include Marine 19, Marine 20, Marine 21, Marine 22, Marine 23, Marine 24, Marine 27 and Marine 30. The offshore blocks on offer in the Coastal Basin have water depths ranging from 100 metres to as much as 3,000 metres. The Coastal Basin is expected to draw the most attention from investors due to Eni Congo’s large finds in the nearby offshore fields of Nene Marine and Litchendjili.

CUVETTE BASIN: The Cuvette Basin, a 16,000-square-metre area bordering the Democratic Republic of Congo along the Congo River, will offer its five southernmost blocks in the 2016 Licence Round, including the Mboto, Ntsinga, Mbesse, Koba and Mboloko blocks. The blocks of the Cuvette Basin are considered highly prospective, though their remote location, wetlands environment and the lack of geological data on the area limit investor interest.

HYDROCARBONS CODE: In October 2016, Congo ratified the new hydrocarbons code passed in August, overhauling its oil and gas industry, which had not been properly reformed since 1994. The law’s objective is to consolidate the country’s production and revenue by encouraging continued exploration and production activity. To that end, the new law introduces provisions conducive to private companies’ recovery of investment as well as more favourable fiscal and Customs regimes. The code expands the authority of the country’s national oil company, SNPC, over the upstream sector.