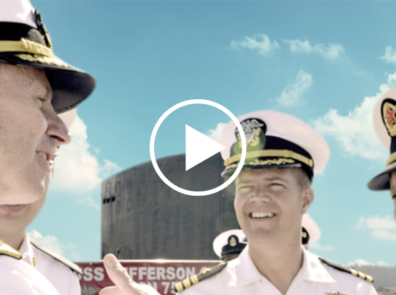 With trillions of dollars of hydrocarbons resources at stake in a region facing high growth in population and energy demands, co-operation in the South China Sea has come to represent a path for sustained growth, economic and energy stability, and global influence.

Struggle for the South China Sea

Global tensions continue to rise over disputed claims of sovereignty in the South China Sea, a region with significant proved and probable hydrocarbons reserves. While the region’s actors are making promising diplomatic efforts to calm tensions, the issues surrounding border disputes and hydrocarbons exploration in the region are of global concern.

China claims almost all of a large stretch of sea between Taiwan, Malaysia, Indonesia, the Philippines, Brunei, Vietnam and Japan. The trouble is, between them, these seven other states all do too.
While tensions have calmed in recent months, the issues surrounding border disputes and hydrocarbons exploration in the region are of immediate concern to the hydrocarbons-hungry states involved.
On March 8, 2017, ASEAN (the Association of Southeast Asian Nations) in collaboration with China released a first draft of the much anticipated code of conduct (COC) governing interactions in the South China Sea. The international treaty will govern demilitarisation and conflict resolution in the region.
Speaking at a news conference in January, Philippine Foreign Affairs Secretary Perfecto Yasay Jr. said that, as this year’s ASEAN chairman, the Philippines would intensify efforts to develop the COC in hopes of making it a reality by mid-2018. Should the COC be agreed upon by all parties, Yasay believes it could lead to bilateral engagement with China for the enforcement of rulings by an international arbitral tribunal.
While those states involved in the COC hope that it will bring lasting calm to the area, the presence of the US military in the region could undermine their efforts, especially after a US Navy unmanned submarine was seized by the Chinese in February.

DEVELOPING COLLABORATIONS: The UN Permanent Court of Arbitration ruled in July 2016 that China’s claims were without historical precedent. Even though the People’s Republic maintains its sovereignty over the sea, and its 11 billion barrels of oil and 5.35 tcm (190 tcf) of gas under the seabed, discussions are underway regarding joint development.
In January 2017, Philippine President Rodrigo Duterte visited Beijing to work on a USD 15-billion investment plan intended to open discussions of collaborative economic development between the two nations.
Despite positive moves towards a lasting peace, the situation remains unpredictable.
On March 9, 2017, a Chinese warship and several survey vessels entered the exclusive nautical zone off of the Philippines drawing the ire of Defence Secretary Delfin Lorenzana.
“I am disturbed by China’s presence there, it is annoying if they will claim the area,” he said.
On March 13, President Duterte revealed plans to build structures in the South China Sea to reinforce its sovereignty in the region.

ONGOING CONFLICTS: The South China Sea has been a geopolitical hotbed for more than a century. Competing free-trade agreements, treaties and undefined ownership further complicate the issue. China cites the “nine-dash line” as the basis for its claims to historical rights in the South China Sea. The line, made public in 1947 and running as far as 2,000 kilometres from the Chinese mainland in places, currently includes waters off of Taiwan based on the “One China” principle, which maintains that the government in Beijing is the only legitimate Chinese government, a position the USA has accepted since 1979.
In addition to its 2016 ruling, the UN Permanent Court of Arbitration also said China’s land reclamation efforts, which amounted to more than 12.9 square kilometres of land in the Spratly Islands, failed to meet the standards of the 200-nautical-mile exclusive zone.
Furthermore, under the UN Convention on the Law and the Sea, the court ruled that Beijing’s island construction violated the terms of its membership in the organisation through environmental damage and dangerous navigational practices.

ANGER AND EXPLORATION: Today, yet more controversy surrounds the status of the Paracel Islands, located 200-300 kilometres east of Vietnam, and the Spratly Islands, a group of 14 islands located about halfway between Vietnam and the Philippines. The island chains are referred to as Xisha and Nansha by the Chinese government, respectively.
China, Taiwan and Vietnam maintain their rights to the islands and their associated resources, while Brunei, the Philippines and Malaysia also claim a portion of them.
Vietnam demanded China move an exploration rig in early April 2016 amid ongoing delineation works in the much-contested waters of the South China Sea.
“Vietnam resolutely opposes and demands that China abandon drilling plans and immediately withdraw the Hai Duong 981 [HD 981] oil rig from this area, and that it not take additional unilateral actions that further complicate the situation,” Le Hai Bihn, spokesperson for the Vietnamese foreign minister, said at the time, adding that a protest had been lodged with the Chinese Embassy in Hanoi.
HD 981, referred to in Vietnam as Haiyang Shiyou 981, was the subject of controversy in 2014 as well, when it was positioned near the Paracel Islands. While the Chinese took control over the archipelago after the 1974 battle of the Paracel Islands, Vietnam never relinquished its claim. When the Chinese moved HD 981 in January 2016, Vietnam issued similar warnings.
Indonesia aims to increase exploration work in the area surrounding the Natuna Islands, the country’s president, Joko Widodo said in late June 2016. Indonesia lays claim to the Natunas and the surrounding waters, which it intends to open up for oil exploration and commercial fishing. The Chinese, through a statement by the Foreign Ministry that month, said the two countries “have overlapping claims for maritime rights and interest,” a position the Indonesians staunchly reject.
In June 2016 Indonesia denied the validity of Chinese claims to the Natuna islands. Indonesian Foreign Minister Retno Marsudi said, “Our position is clear that claims can only be made on the basis of international law. For Indonesia, we don’t have overlapping claims in any form in Indonesian waters with China.”

RESOURCES: The islands may have significant natural gas resources, according to a 2013 report by the US Energy Information Administration, with the Reed Bank alone estimated to hold up to 5.4 billion barrels of oil and 1.56 tcm (55.1 tcf) of gas. China is determined to have 10% of its energy mix supplied by gas by 2020 and so control of this area is highly desirable.
The damage exploration has done to bilateral relations with Vietnam has not halted China’s efforts, and China continues to pursue an aggressive energy strategy in the South China Sea. In 2016, it announced a bid round for 18 blocks spread across five basins covering 52,257 square kilometres. Assets will be awarded to foreign oil companies in collaboration with CNOOC.
The terms for the tender allow for consortiums of foreign companies to bid as long as CNOOC is the operator and financing can be guaranteed. The government will also offer flexible terms for exploration periods and payment of fees in deepwater plays.

GEOPOLITICS: China continues to expand, much to the consternation of its neighbours in Southeast Asia, the USA and other powers. In 2014, the nation began a land reclamation effort in addition to constructing artificial islands akin to Abu Dhabi’s Palm Island projects. A 2016 Pentagon report stated the developments enable China to enhance its long-term presence in the South China Sea.
Concerns continue to mount in the international community over the possibility of a military presence based at these structures. Speaking in Sydney in December 2016, head of the US Pacific Command, Admiral Harry Harris, emphasised that the USA is ready to respond if Beijing continues on in an “aggressive” manner. “We will not allow a shared domain to be closed down unilaterally no matter how many bases are built on artificial features in the South China Sea. We will co-operate when we can but we will be ready to confront when we must.”
While other countries in the area have embarked on land reclamation projects, these efforts are minuscule – 0.4 square kilometres compared with China’s targeted developments more than 12.9 square kilometres.
Adding to the already tense geopolitical climate in the South China Sea are statements by US President Donald Trump, who issued a warning to China regarding the South China Sea in January of this year. “If those islands are, in fact, in international waters and not part of China proper, yeah, we’ll make sure we defend international interests from being taken over by one country.”
Former Exxon CEO now Secretary of State Rex Tillerson echoed President Trump’s words in the same month, warning the Chinese to stop building, in addition to stating that China’s access to the islands would not be permitted. “We’re going to have to send China a clear signal that, first, the island-building stops and, second, your access to those islands also is not going to be allowed.”
China responded that any US incursion into the area would be considered an act of war. The administration has subsequently quieted regarding its assertions in the South China Sea in addition to bowing to tradition and adhering to the One China policy.
President Donald Trump is expecting to meet with Chinese president Xi Jinping at Mar-a-Lago in April, an informal visit aimed at cooling tensions between the two countries.
While none of the countries involved is willing to cede their maritime claims, collaborative developments between the ASEAN countries is a very real possibility. With trillions of dollars of hydrocarbons resources at stake in the face of growing populations, for China controlling the South China Sea has come to represent a path for sustained growth, economic and energy stability and global influence.

STAYING POWER: A decision for co-operative engagement in the South China Sea could reach a resolution as early as mid 2018. Should the states involved in the dispute fail to reach a peaceful settlement, the USA, through its alliances with Japan, would likely be drawn into the diplomatic fray.
There are several options to defuse mounting tensions, such as resource sharing, a multilateral framework, international arbitration and communication among military entities to de-escalate any potential armed conflict.
During the 23rd ASEAN summit in Brunei in 2013, ASEAN Secretary-General Le Luong Minh said: “The South China Sea issue is not just about competing claims; it’s about peace and stability in the region. The South China Sea is an important sea lane for the region and the world. Maritime security should be protected.”
Minh recognised that not only are large amounts of resources and USD 5.3 trillion in maritime trade in play, but also economic stability for the region and the world. Although diplomatic efforts to find co-operation are promising, China’s growing energy demands, which reached 20.9 billion boe in 2016, can only be assuaged so long.
In developing the region’s resources, the hydrocarbons industry will likely be navigating both dramatic diplomatic efforts as well as unilateral actions and the heightened tensions that they bring.

Oops, there are no posts.